A couple of months ago, I talked about trying to get into a very lovely dress.  Let's be honest, I failed miserably.  I am really shocking at anything vaguely to do with weight loss unless I have a support network.  I've given up a number of really annoying habits in my life, but comfort eating really is the one I suck at ditching.  Because, you know, Quavers.  So to defeat the urge to eat Quavers, I really do need that network of people sharing my pain.  I'm not into weight loss groups, for some reason they just doesn't appeal to me at all, so what I need as my support network is something much closer to home.  For reasons I'll go into in this week's Geek post, R has decided to embark on a health kick.  Perfect.  A support network right in my house!  I extended the network to include my ever suffering friend, J, who gets dragged into pretty much anything I do, and together we created The Biggest Loser: Outlaw Stars. 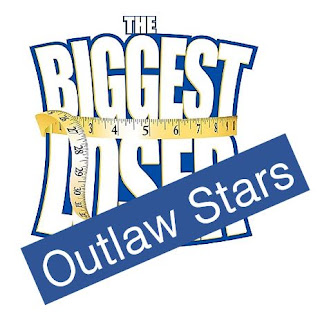 The goal is to keep our motivation up to actually shift some weight between us.  Well, I'm happy to report that so far so good.  I won't report their weight loss, but I've shifted 4.4% of my weight.  I have been the weekly Biggest Loser of the group.  Then, last week, after working just as hard I successfully lost no weight.  Not a single pound...  Yes, I had discovered that the curse of week 2 in the Biggest Loser really is a thing.

If you're not familiar, week 2 is a regular occurring horror in the Biggest Loser where people who've shifted a ton of weight in week 1 suddenly don't lose anything at all.  Sometimes they even put on weight.  Pretty nasty for a person when they've had Bob or Jillian chasing them around all week.

I certainly felt that downer.  It opens up the inner child that says; well what's the point of making an effort, to get nothing out of it?  I'd imagine, if I didn't have a couple of the other Outlaws doing this with me, I'd probably just give up.  But I'm determined not to.  I don't want to be the person who gets eliminated in week 3 after losing their spirit after week 2.  So today, on top of what I'm doing anyway, I added in an extra walk in the hope that I'll get out of my week 2 funk.  That brings today's step total to around 13,500 which is roughly 5.5 miles.  Not bad for a Monday, I'd say.  Now I'm just hoping that the extra effort is going to pay off or me and my stubborn body are going to have some serious words...
Posted by TehTri at Monday, June 08, 2015

Get Me Delivered to your Inbox!